If you’re like me, you love a good energy drink. They give you the boost of caffeine that you need to get through the day. But have you ever wondered how much caffeine is in Rockstar?

I’ll admit, I used to be one of those people who didn’t care about the amount of caffeine I was consuming. I would just chug back can after can and not think twice about it. That is until one day when I started feeling some serious side effects. Since then, I’ve done my research on these popular drinks and wanted to share with you how much caffeine is in Rockstar.

What Is Rockstar Energy Drink?

Rockstar is an energy drink brand that provides a boost for those with active lifestyles. It comes in many delicious flavors, making it perfect for athletes and rockstars alike!

Rockstar Energy Drink provides a variety of flavors and lines to choose from. You will never be without options when it comes to this energy drink brand. With so many different flavors, you are sure to find the perfect one for you.

How Much Caffeine Is In Rockstar Energy Drink? 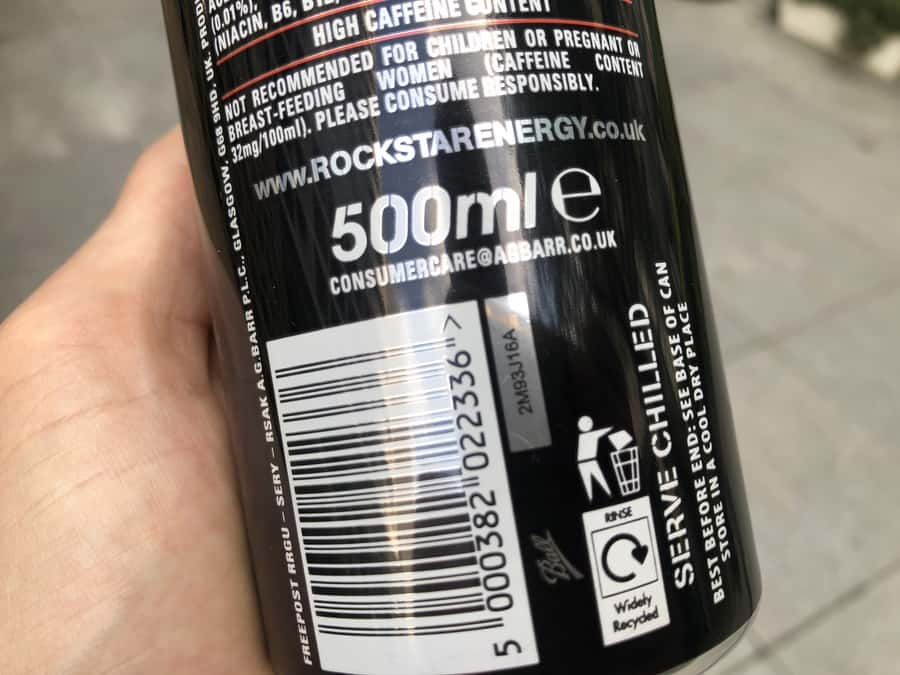 A can of Rockstar Energy Drink contains a whopping 160 mg of caffeine, making it one of the stronger energy drinks available. With nearly double the amount of caffeine found in a regular cup of coffee, Rockstar is sure to give you the boost you need.

The US FDA recommends that you consume no more than 400 mg of caffeine a day to avoid any adverse side effects such as insomnia, tremors, anxiousness, increased heart rate, stomachache, nausea, headache, and dysphoria (a feeling of unhappiness).

As the warning label suggests, it is probably best to avoid energy drinks if you are young, pregnant, or breastfeeding as you would be more sensitive to the effects of caffeine.

I prefer to have drinks with 100 mg or less of caffeinated beverages per serving.

Caffeine tolerance varies from person to person, so it’s important to know your limits before you choose a can of Rockstar.

How Much Sugar Is In A Rockstar?

Each 16-ounce can of Rockstar has 27 grams of sugar.

While this may not seem like a lot, it’s still important to remember that the recommended daily amount is 36 grams.

Sugar is delicious, but consuming too much of it can have some negative consequences such as fatigue, low energy levels, poor mood, and bloating.

Long term, too much added sugar in your diet can lead to several health issues such as tooth decay, type 2 diabetes, acne, weight gain, and high blood pressure. It is also worth noting that sugar can cause aging skin.

Therefore, it is important to monitor your intake of Rockstar, or any other energy drink, to avoid potential health problems in the future.

What Are The Potential Side Effects Of Rockstar Energy Drinks?

In 2012, an Australian study examined the health risks associated with consuming energy drink brands like Red Bull and Monster.

They examined 7 years of records of people calling the Poison Control Center for energy drink-related emergencies. They found that there were a variety of harmful symptoms such as:

In extreme cases of overconsumption, some energy drink brands have been linked to:

Drinking Rockstar energy drinks in moderation is not likely to cause any serious side effects. However, drinking too much Rockstar or other energy drinks can lead to death based on these serious health complications.

In 2013, a man who was drinking 2.5 liters of Red Bull a day developed severe heart palpitations and difficulty breathing.

He consumed four drinks in about six hours. His condition worsened over the next few days.

They told him he had a heart attack and he needed surgery immediately.

He sued the energy company for $1.5 million.

Energy drinks can have adverse effects on adults and they are more likely to cause negative side effects in children.

A study in 2007 published in the journal Pediatrics found that over half of the cases of pediatric caffeine overdose were caused by energy drinks.

How Many Rockstars Can You Drink A Day?

I recommend that you consume only one Rockstar can per day. If two are needed, then only drink them sparingly.

It’s not just the calories or caffeine in Rockstar that can be detrimental to your health – it’s also the sugar.

Drinking two cans of Rockstar a day puts you way over the recommended daily sugar limit, which can have some serious consequences for your health down the line.

It’s important to be mindful of how many Rockstars you drink in a day and to avoid mixing energy drinks with coffee or tea. Consuming too much caffeine can have negative effects on your body.

Some experts claim that it is one ingredient in particular in Rockstar that is causing more issues than the rest. Other experts say that it’s the combination of all of these ingredients that is the issue.

Energy drinks such as Rockstar have been shown to cause more health issues than drinking coffee or soda on their own.

If you’re wondering how much caffeine is in Rockstar, the answer is about 160 mg per can. This amount of caffeine can lead to some serious side effects like anxiety, jitters, and heart palpitations. So if you’re sensitive to caffeine, it’s best to avoid these drinks or limit your intake.